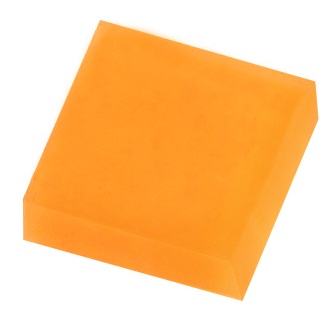 - No need for some major components, such as lead-frame and gold wire as well as expensive packaging equipment, such as die bonding and wire bonding machines.

- Commercialization of WICOP will increase the burden on LED companies that have invested heavily in packaging processes.

- As Seoul Semiconductor has already secured the global patent portfolio related to WICOP, it will closely monitor the market and any similar products based on this technology. 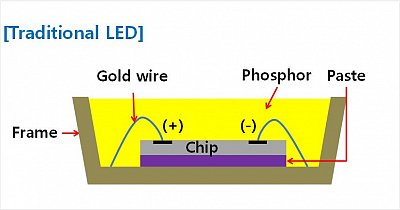 Seoul Semiconductor, a global leader in LED technology (www.seoulsemicon.com) announced a new product, based on the new concept of WICOP LEDs. This technology does not need processes such as die bonding or wire bonding which are necessary for conventional LED package production nor does it contain major LED package component parts such as lead-frame, or gold wire.

WICOP (Wafer Level Integrated Chip on PCB) is a totally new concept for an LED product which has overcome the limits posed by the existing CSP (Chip Scale Package) solutions. 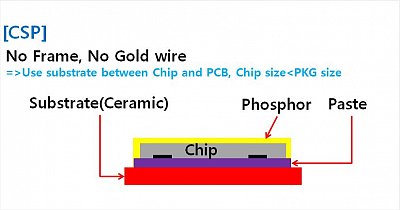 Seoul Semiconductor succeeded in developing and producing the product for the first time worldwide in 2012. As it is designed to directly connect the chip to PCB, there is no need for packaging processes, such as die bonding or wire bonding. In addition, as there is no intermediate substrate, the size of the chip and package is the same. It is characterized by the super small size and high efficiency. It is also good for the high luminance and thermal conductivity.

In the case of the widely available product TOP LED, a variety of equipment is required for the production such as die bonding machines to attach the chip to the lead frame, wire bonding machines to connect electrodes to the gold wire, as well as material in the product itself, such as lead frame, gold wire, and adhesives required in each process. Due to this packaging process a conventional LED results in a package size larger than the actual chip size, and so is space limited as the size of the chip could not be made smaller to meet specification requirements.

Seoul Semiconductor were the first to introduce a complete concept of WICOP products in which the size of the package (PKG) is the same as that of chip, and does not use other costly materials by directly attaching the chip to the PCB. It started to mass produce relevant products and supply them to client companies, thus firmly establishing its position as the leading company in the industry. Also, it secured global patents in respect to WICOP and succeeded in constructing a technological entry barrier. 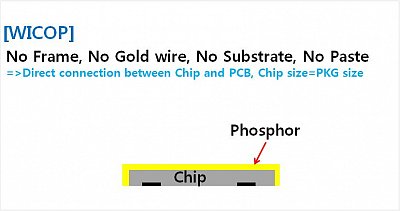 Since 2013, WICOP has been supplied to main customers for use in LCD backlights and camera flashes, as well as in head lamps of vehicles. With the release of an LED package WICOP2 for use for lighting applications, Seoul Semiconductor has been able to possess a WICOP product portfolio applicable to all fields of the LED industry. Seoul Semiconductor plans to actively target an LED lighting-source market made up of luminaires, vehicle, and IT products that is currently estimated to be approximately $20B with this WICOP technology.

Seoul Semiconductor (http://www.seoulsemicon.com) manufactures and packages a wide selection of light emitting diodes (LEDs) for the automotive, general illumination/lighting, appliance, signage, and back lighting markets. The company holds more than 10,000 patents globally, while offering a wide range of LED technology and production capacity in areas such as “nPola”, deep UV LEDs, "Acrich", the world’s first semiconductor light source that operates directly from both AC and DC power supplies, and "Acrich Multi-Junction technology," a proprietary family of high-voltage LEDs. Soyter Components is the partner of Seoul Semiconductor on Polish market since 10 years.